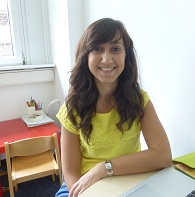 Elena Pagliarini is a research fellow at the Center for Brain and Cognition (CBC) of the Universitat Pompeu Fabra (Barcelona). In 2016, she received her Ph.D. in “Experimental Psychology, Linguistics and Cognitive Neuroscience” at the Università degli Studi di Milano-Bicocca. During the Ph.D, she worked under the supervision of Prof. Maria Teresa Guasti on a project on predictive abilities in children and adults with Developmental Dyslexia. During her Ph.D she was a visiting scholar at the ARC Center Macquarie University, Sydney, under the supervision of Prof. Stephen Crain. Since 2016, she has been collaborating with the BabyLAB headed by Prof. Barbara Höhle at the University of Potsdam (Berlin).

Her research focus are: the syntax-semantics interface and pragmatic inferences (such as scalar implicatures and free choice inferences) in L1 acquisition; the semantic interpretation of logical words across different languages; the predictive abilities in children with Developmental Dyslexia and Specific Language Impairment.