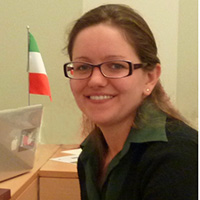 Her first contact with the Deaf community and Italian Sign Language (LIS) was back in 2004 when she enrolled at Ca’ Foscari University in Venice. While there, she trained both as linguist and as interpreter. She earned her BA degree in Foreign Languages and Language Science in 2007. In the academic year 2007/2008, she attended a course in LIS/Italian interpreting and since then she has been working as interpreter in several settings (school, university, international projects, and conferences). In 2011, she received her MA degree in Language Science with a thesis on the distribution of adjectives in LIS. In 2015, she earned her PhD degree with a dissertation exploring the syntax of LIS nominal expressions (advisors: Prof. Carlo Geraci and Prof. Anna Cardinaletti).

Since the end of her PhD, she has been involved as a postdoc (at Ca’ Foscari University and at the University of Milano-Bicocca) in various projects aiming at investigating structural aspects of LIS grammar. The issues she has mainly focused on are the distribution of nominal modifiers, null arguments, motion predicates, appositives, and impersonals.